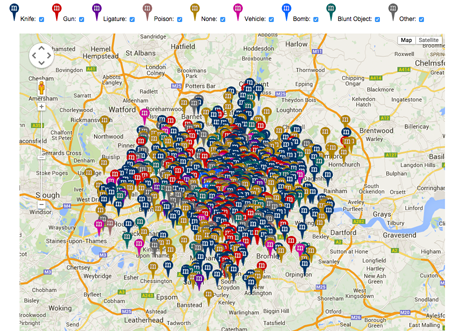 Spotted originally by my colleague Conrad Taylor, a geospatial application that plots more than 400 homicide cases reported by court reports and the Old Bailey’s archives. Something for the ‘gruesome violence’ mashup category maybe. You can even do deep dive query’s according to the type of murder weapon used, e.g. ligature, knife, gun, etc.

According to the website, the ‘murdermap’ project is dedicated to covering every single case of murder and manslaughter in London from crime to conviction. It aims to create the first ever comprehensive picture of homicide in the modern city by building a database stretching from the era of Jack the Ripper in the late 19th Century to the present day and beyond.

Information is obtained from the police, media coverage, court records and original reporting – and by making the map freely available the site’s owners hope to reveal the stories behind the crime figures.

I’m not quite sure of the utility of this data, other than to criminology researchers, though I guess it might be useful for the housing market, e.g. “am I moving to/living in an area where I’m more likely to be shot or stabbed?” Come to think of it, I’ll check that out!

“Maybe it shows there is a fate worse than death – being mashed up afterwards.” CT

One thought on “Murdermap Mashup”